TL;DR - Most recent comics are in the Blog. For much older stuff, go read Horde of Neurons, or M0NK3Y & Cybernana.

I've Made Some Comics 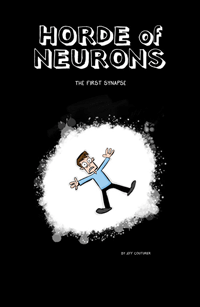 As the title implies, Horde of Neurons is a writhing ball of partially formed thoughts prone to wild tangents and complete nonsense. It started in 2011 as an experiment. I had no set characters, no story—hell, I didn't even have a set size or medium that I planned to work in. I just wanted to make comics, and learn about exactly how I wanted to make them along the way. So I made strips in a loose webcomic format.

In April of 2013 I put Horde of Neurons on hiatus so that I could concentrate on a few larger projects and longer stories. Experimenting with Horde during those first two years led to some long-form story comics, and I really wanted to put more energy into those. Horde continues, but has no regular posting schedule. I post Horde comics here as I make them, which may be once a week or once every few months. Just like Horde's content, the schedule is tangential. I've self-published a collection of Horde of Neurons that I sold at Wizard World Comic Con, Emerald City Comic Con, online, and through Quimby's Books in Chicago. 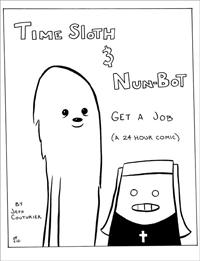 Time Sloth & Nun-Bot is a 24 Hour Comic, which is a 24-page comic written and drawn in just 24 hours. Every year, comic artists around the world spend 24 Hour Comic Day making comics. I made this comic between October 20th and 21st, 2012. Like Horde of Neurons, I self-published this one and sold it at conventions, online, and through Quimby's Books.

It's about a time-traveling sloth and his best friend, a robot nun. They get a job at Pizza Portal, which delivers pizzas through trans-dimensional portals. Things go horribly wrong. 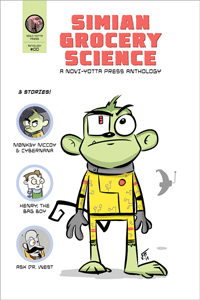 A self-published comic, the first of my Novi-Yotta Press books with three stories. 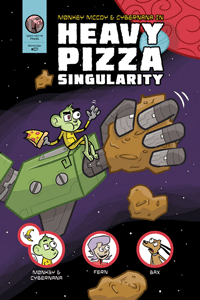 The second of my self-published Novi-Yotta Press books, this time with a much longer M0NK3Y McCoy & Cybernana story. Then a short 4-page story called Special Order 19, about an inter-dimensional pizza delivery technician's first day on the job.

Our Fair City is a fantastic audiodrama founded in 2011 that tells a darkly funny story of post-apocalyptic life mixed with retro-futurism. Along with regular podcast episodes, OFC has produced 5 comic anthologies with stories set in the Our Fair City universe. I was honored to be asked to make comics for anthologies 4 and 5. The first of which was Ask Dr. West, and the second titled The Legend of Hot-Foot.

What if Sheena: Queen of the Jungle was mashed up with Buck Rogers? I'm part of a group of comic creators that asked this question, and decided to collaborate on a comic using the idea. We came up with Venusia: Cytherian Queen, which retells a Sheena story set on another planet far in the future, replacing Sheena with a new heroine named Venusia. Each page of the story was drawn by a different artist. Here's my page.

I partnered up with Denver Brubaker to contribute to issue 2 of Aw Yeah Comics.

Denver Brubaker and I got together again to create a chapter of Brock Heasley's Superfogeys. Brock wrote it, Denver drew it, and I colored it. You can read it here.