Something fun for the new year, done in Procreate. This is Earl, and his Bewmstick model-59. More below... 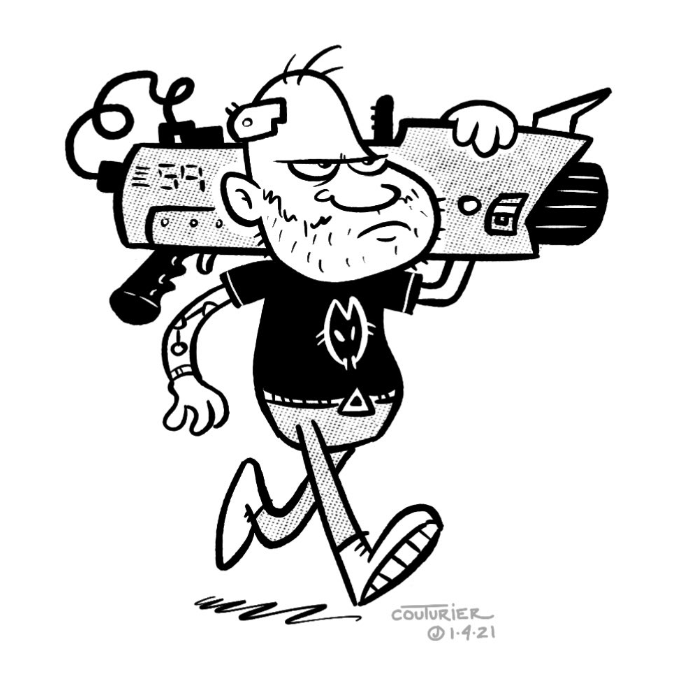 I've been doing a lot of these black and white sketches lately and it's a comfortable place for my art. Coloring often feels like a struggle since I endlessly fuss over palettes and shading, and wind up spending more time fidgeting with the color than it took me to draw the whole thing. These black and white drawings take a lot of that pressure off, and so long as I use halftones for any shading it'll be easy to go back and recolor them later if the mood strikes me. I have a whole pile of these from 2020 that I didn't post here (they made their way to my twitter though).

I hate to admit that it totally sucked the wind out of my creative sails, making it really difficult to make progress on projects or even just sketch for fun. Joy, it seemed, was really hard to come by. The 2020 ThingsTM are far from over, but it does finally feel as though there is some small light at the end of the tunnel. Of course, with it being a new year, I have the usual reflection on what I did last year and grand new plans for this year. Some of those will fall through, but I do feel a sense of renewed motivation. Despite (and probably in spite of) that terrible year, I was reminded that this life is short and volatile. It's horribly cliché, but that doesn't make it any less true: we spend far too much time on things that don't matter, and far too little on what does matter. Making comics has always felt as essential to me as breathing, it's something I deeply need to do. And when I don't, it has a direct impact on my state of mind and well-being. 2020 wasn't merely a reminder of this... It was like getting run over by a fleet of garbage trucks telling me to pay attention. So hey, 2020, I get it. I hear you. You can stop being such an asshole about it.

So this year I'm adjusting some projects I've been working on, and have some new things on the horizon. I've been working on Death Metal Galactic for nearly 2 years (!!), and have learned a lot along the way—but still don't have it ready to publish. Early on I quickly realized there was a lot about the story and art that I wanted to refine. And while it hasn't been a quick process, I am happy with where it's going. This story means a lot to me, and I need to be happy with the end result. That has also led me to realize it can take as long as it takes, there is no need to rush.

There is another new project I'll get into this year as well called Big City on a Doomed Planet. It's more episodic (as opposed to Death Metal Galactic's big story) and will likely be in shorter strips rather than full pages. Lots of fun weirdness, cyberpunky scifi, slice-of-life twisted into something absurd. I'm pretty excited about it, and it still relates pretty heavily to DMG, but I'm not quite ready to let it out of the bag yet. So, stay tuned.

And finally, I may dive deeper into things like a Patreon/Ko-fi/Gumroad this year too, but am not 100% on that yet.

Anyway, we made it out of that horrible year. This new year was born with a shitload of inherited problems, but here's to hoping we all have a better one. Thanks for reading, mask up, hug people you love, and stay safe out there.